Psilocybe cubensis var “John Allen” was reportedly discovered near Ban Tailing Ngam, Koh Samui, Thailand by infamous mycology John Allen himself. A single wild print started the strain which was named by a cultivator after the mycologist who discovered it. Even though John Allen is a world-renown scientist, this strain is highly recommended for beginners.

All spore syringes are for microscopy/art/collection purposes only.
Each spore syringe is 10 mL and comes capped with a separate sterile 18 g needle. 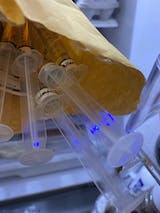 Even though the syringe came with what looked like clear liquid, once I put a few drops onto a microscope slide, my field of vision was filled with spores. I also appreciate the freebies. I try to tell all my mycology friends about MMM now. Now I just have to figure out what I want to order next.

A
A.
Best to date

Very happy with this John Allen spore syringe. Amazing genetics. Grateful for all the work others have put into this gift.
Thanks

I have used MMM for orders now exclusively for somewhere around 6 to 8 months. I can honestly say these are some spectacular genetics and they haven't failed me yet. The spores are active and not dead or contaminated every time and the customer service is immaculate

Hands down 1 of my top 3 to study...Mesh is my preferred payment method,and MMM as a whole is my favorite vendor!! Be sure to add JA to your spore library,just like MMM,it never disappoints!!

Be sure to check the homepage for relevant announcements!

I will be listing sales, giveaways, new products, limited products etc, so be sure to see what is new in the current and recent months before stocking up your cart 🙂

MMM is 75% a 1 person operation. My partner helps with packaging but MMM runs everything else including making spore syringes and swabs, gourmet items, customer service, website maintenance and much more... As such, I try to be available ASAP but may not answer right away. I do everything I can to respond ASAP but I am most available at these times below. It is usually not more than 24 hours to hear from me. I try to answer emails on the weekends at least once or twice a day, but may be busy so please be patient when messaging outside these times. Thank you!

*~*~*~* MR is my preferred payment method but has been buggy for some customers. If you have issues using it let me know and feel free to use any of the other listed methods that work for you. *~*~*~* Happy to now offer payment plans through Affirm! You can use Affirm to pay for orders over $50, your order ships as soon as the order completes but you pay back Affirm with a payment plan. Dismiss